If you can picture the cerulean blue waters of the Mediterranean, you will understand why the birthstone for March is named Aquamarine.  Derived from the Roman word "Aqua," meaning water, and "mare," meaning sea, this pale blue gem does indeed resemble the color of seawater.  The ancient Romans believed that the Aquamarine was sacred to Neptune, the god of the sea, having fallen from the jewel boxes of sirens and washed onto shore.  Early sailors wore aquamarine talismans, engraved with the likeness of Neptune, as protection against dangers at sea.

Aquamarine varies in color from blue-green to a light sky blue, but gems containing green are often heat-treated to remove this less desirable color.  The majority of Aquamarines, unlike other gemstones, are flawless.  It is a relatively abundant gem, the largest deposits being in Brazil, but other sources of Aquamarine are in China, India, Australia, Africa, and the United States.

Aquamarine is a stone of courage.  Its calming energies reduce stress and quiet the mind.  Aquamarine has an affinity with sensitive people.  It can invoke tolerance of others and overcomes judgmentalism, giving support to those overwhelmed by responsibility.  Clarifies perception, sharpens the intellect and clears confusion.  Useful for closure on all levels.  Promotes self-expression.  Soothes fears and increases sensitivity.  Sharpens intuition and opens clairvoyance.  Wonderful for meditation.  Shields the aura and aligns the chakras.  Highly protective during pregnancy, it helps to guard both mother and baby from harm.  Discourages miscarriage.


A gift of Aquamarine symbolizes both safety and security, especially within long standing relationships.  Some people even say that the Aquamarine reawakens love in a tired marriage, so if you want to bring back that spark in your partner's eyes, you might consider this gem as an anniversary gift!
Here at NY Diamond Boutique we have a wide selection of Aquamarine Stones, in various styles of jewelry such as bracelets, rings, bangles, and pendants.
Posted by NY Diamond Boutique at 11:02 AM No comments:

Reasoning behind the Diamond Engagement Ring 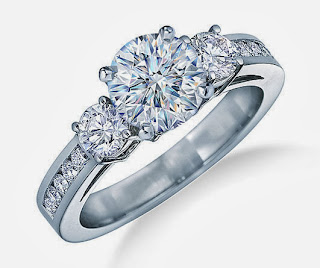 Men should think about the significance of any jewelry before giving one in the setting of a ring or signifying that it is one meant for an engagement. It shouldn’t be given loosely in any jewelry because if diamonds are forever, then a meaning behind one should be one meant to last for eternity as well.

For example, if a pendant is given to a woman by her children, she will be eternally grateful when she sees it because of the love that is unmistakable when her children pitch in and buy a meaningful gift. If a sister gives a bracelet to another sister, the same holds true.

The clear stone engagement rings are a promise of things to come, of a future marriage. However, plans can change. Still, the love that was there when the ring was given becomes a forever memory of a love once shared. A diamond ring is a thoughtful gift of promise, an engagement of two people with the same intentions of marriage.

Of all the pieces of jewelry given throughout life, those given with diamond center pieces are those that speak the loudest to those who see the piece. It’s the one that shows a commitment of sorts to others and to the one who wears it.
Posted by NY Diamond Boutique at 1:36 PM No comments:

Secrets of a Diamond Clarity & Grading

In Choosing a diamond for Engagement Ring or any item of jewelry, clarity(one of the 4 C's) in grading a diamond including cut, color & carat weight is of great importance in determining a diamonds value

Since diamonds for under tremendous heat & pressure over thousands of years, it is extremely rare to find a diamond without any internal or external flaws. In some cases, these flaws or inclusions are in the form of dark spots, cracks or clouded areas of the diamond and can be seen without magnification lowering a diamond value.

Posted by NY Diamond Boutique at 1:41 PM No comments:

This Years 3 Most Important Days to Save!

As usual the holidays are fast approaching and NY Diamond Boutique is Forest Hills, NY wants to be sure you don't miss every opportunity to shop and save on gifts. No matter if youplan on giving a diamond engagement ring or another special gift, there are 3 days to keep in mind when all retailers will offer special savings on Holiday Gifts.


1. Of Course the most popular is "Black Friday"
the day after Thanksgiving; November 29 When stores will open in
Predawn hours to accommodate bargain hungry shoppers

2. The Following day, Saturday, November 30 Has Come to be known
in recent years as "Small Business Saturday" On this Day, independent
retail stores have their turn to bring shoppers in through special sales
of the day
3. Monday December 2nd is "Cyber Monday" when online sales
are huge for both major chain retailers and small independent businesses
with websites.

Whether you shop for fine gold jewelry or other gifts for that special person don't miss out on there important shopping days.
Posted by NY Diamond Boutique at 9:11 AM No comments:

3 Reasons Why You Should Shop at NY Diamond Boutique

With the Holidays just around the corner, you may be in the market for an engagement ring, a diamond necklace or bracelet or a name brand watch. Even before you decide what to buy, the question of where and who to buy from is there.

Of Course some items sold in volume such as electronics are standard in quality and can be purchased from major chains based on price. Fine jewelry however is different and is best purchased from NY Diamond Boutique for a number of reasons.

1) First of all NY Diamond Boutique provides personal connection that is genuine, assuring quality and integrity.

2) Not all diamond, gemstone or gold jewelry in general is the same. Chains & department stores sell what is sent to them in bulk by a separate buyer. We personally select diamonds and gemstones which meet strict guidelines of quality, not to mention custom designing something special for you.

3) Also, consider benefits we offer our customer in addition to the product such as; sizing, appraisal, trade-in, cleaning, etc.
Posted by NY Diamond Boutique at 11:26 AM No comments:

How many times have you been to a jewelry store and haven't really felt comfortable from the moment you walked in? That's not your fault that's the sales person who didn't do a number of things to make you feel comfortable & welcome. Often as a customer, we rely on saying, " Just looking." But in the most cases, we came in the store with something in mind. It is now the job of the jewelry sales person to lead you to what you may want to see, a ring, a pendant, a bracelet, etc.

* If you say "just looking" you should be engaged to want to look; "Well, just look at this new item we just got in" or "Where would you like to begin" or "Let me show you a tour of the store to facilitate your browsing" are what you should hear.

* You should recieve an expereince you can't get else where

* You should feel a desire to be waited on.

If the sales person silently walks away after, "Just looking" most times, you won't want to do business there!

Posted by NY Diamond Boutique at 9:41 AM No comments: